I love reading--and I love it when I find blog pages which feature articles for me to read.

Here are a few for you:

Green Smoothie Challenge! I don't even own a blender but I'm all signed up and my daughter is on board to help me drink them. (All the recipes are for two.)

New Year's Resolutions. (sigh). Must we?

An oldie but very good: David Sedaris, a fitbit and the Sussex downs.

Posted by Alana in Canada at 12:30 AM No comments:

Email ThisBlogThis!Share to TwitterShare to FacebookShare to Pinterest
Labels: reading

I was a tad dissappointed the science wasn't more, well, more scientific. Let's call it C6 (bad) and C10 (good). Call what?

However, the appendix in the back does have more resources, so I can pick those up later if I want to get into that part of it.

The message is simple though.

What will you choose today? Life and growth--or death and decay?

It boils down to this: 45 minutes of good, hard exercise 6 days a week, lift weights on two of those days.

Today I chose growth. It wasn't 45 minutes--it was only one mile. And it was a tad easier than I'd expected (but still, no walk in the park!) 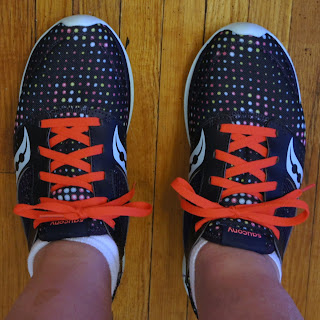 These are the fugliest shoes, ever. But I don't care!

I bought these gawd-awful shoes today, because they were the right price and I didn't want to feel guilty about spending too much--and I didn't want the price of the shoes to be my excuse not to work out. I have to much to lose to be looking for excuses. At least these aren't as obnoxious as the pink ones that were there.

Posted by Alana in Canada at 8:18 PM No comments: 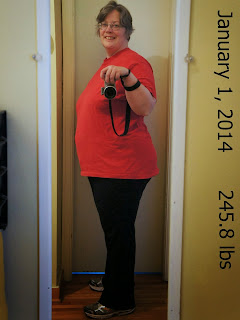 Posted by Alana in Canada at 12:51 PM No comments:

Walked home from work today. It was about plus one (celcius).

After thinking about doing some stretching for a couple of weeks, now, I finally cracked open my Exercise Bible and got down to the Mobility Exercises.

Went much better than I'd expected. The lying supine stretch is still next to impossible, as is the wall roll down, but the opposite arm and leg reach was more than doable. Guess all that walking at work has paid off!

I threw in a hip flexor exercise (a lunge)--doable but only by hanging on to a chair. Also did an inner thigh stretch. I read that my hamstrings may be tight because my hip flexors are also tight. Thus.

Also did some squats. Not sure why.
Posted by Alana in Canada at 9:24 AM No comments:

I am relieved. The weight gain has slowed--even, perhaps, stopped. It's breathing room while I figure out what to do. I am grateful. I need it.
Posted by Alana in Canada at 10:59 PM No comments:

Alana in Canada
Hey there! I'm a home-loving introvert in a small house with my hubby, our two teenagers and his Beagle. From cleaning, to organizing to decorating, I love creating a better home for us all..

There is no greater power in life than developing the power to transform ourselves into individuals with exquisitely developed powers of resilience, equanimity, acceptance, gratitude, grace, empathy, and compassion. --Brian Alger Exploring Life